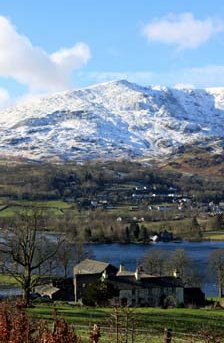 In 1974 Bill Gardner, the editor of the Westmorland Gazette, who knew of a Talking Newspaper in the south of England, decided to start one in Kendal.

Initially it was a co-operative project, involving the Westmorland Voluntary Society For The Blind (which later became Sight Advice South Lakeland) and other organisations and generous individuals. In 1989 we went solo and we remain grateful to the Westmorland Gazette for allowing us to use their material and for their general co-operation.

We used cassette tapes for many years, but in 2008 we changed to digital and now record onto memory sticks played on USB players. We were one of the first Talking Newspapers to adopt this system.

We use the Post Office 'Articles for the Blind'  Freepost service to send out the weekly recordings.

Our area of operation is similar to that of the Westmorland Gazette.  Broadly, we serve the South Lakes area from Ambleside in the north to Grange-over-Sands in the south, and from Coniston and Ulverston in the west to Sedbergh and Kirkby Lonsdale in the east.

The South Lakes Talking Newspaper Association is funded entirely by donations, and staffed by volunteers. If you would like to donate to support our charity it would be very much appreciated. Please use the details on the Contact Us page to get in touch.